With 7 days to go until Cape Town we could almost see the finish line on the horizon. But we had to work hard to get there. Between us and the Cape Town finish lay 910 km, a few climbs through several seemingly endless passes, painful corrugation and amazing sceneries through the Namaqualand and Cederberg.

The day out of Felix Unite over the South Africa border to Springbok was an easy pedal. After the border crossing we rode on the N7 out of the Orange River Valley to about 1000m. I turned my head several times to admire the view over the Richtersveld Mountains. From there it was an up and down over numerous rolling hills all the way to Springbok with a special permission to use the national road, as it is usually forbidden for cyclists.

The temperature dropped below 5 degrees that night and left us with a chilly morning to ride our bikes, in fact it only warmed up around lunch time. Quite a change to the desert temperature only few days earlier. It was the first time since Egypt that I needed to wear a base layer and gilet. The road was corrugated and sandy all the way from Springbok to Kliprand. Apparently the road had been in a much worse condition still a few weeks earlier. Not sure how a road can get anymore corrugated, when even our mountain bikers with a comfortable suspension were suffering. On arrival in camp I felt as if I had aged 20 years, my knees, wrists and back were in agony. But nothing a thorough stretch, some ‘Deep Heat’ gel and solid 10 hours of sleep can’t fix. 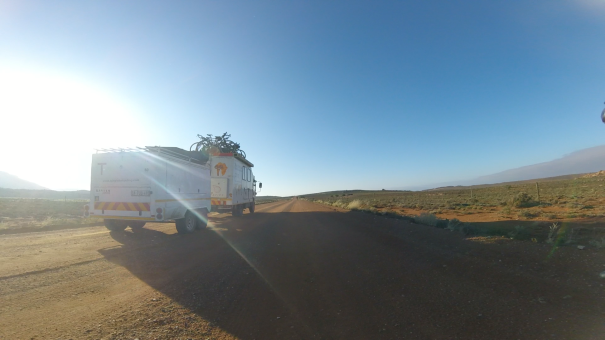 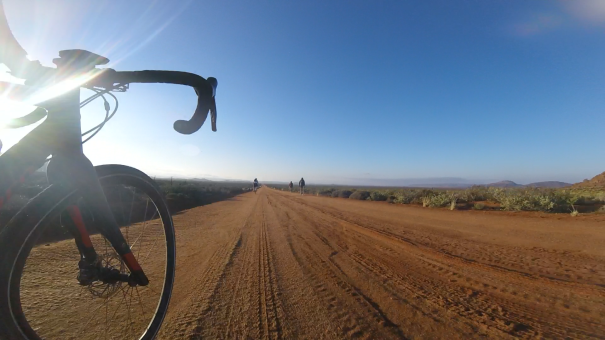 After the previous day’s hard-core corrugated ride, I decided to reward myself with a recovery ride to Nieuwoudt Ville, albeit being a race day with a proud 1830m of climbing. The greenery out of Kliprand and into Namaqualand Nature Reserve was spectacular. Ahead were beautiful mountain ranges. The vegetation grew greener and thicker the further we rode into the park. Washed out roads indicated that heavy rainfalls had gone through the area not long ago. The temperatures have drastically come down since our border crossing to South Africa, now ranging between 5-15 degrees.

I had a big time advantage over Emma and was confident that I could keep the lead to Cape Town. However, there was still one Mando day ahead and in case I could not finish for whatever reason, I would receive an 18-hour penalty, potentially leaving me in second position. My cautious side convinced me to better race this day to gain some more time advantage, for just in case. I started the morning with my music in my ear and went full gas, within the limits of my tired legs. I had one or two riders following me for some time until I found myself alone. The first 50 km of the route was more or less flat, before we dropped about 500m down the Botterkloof Pass into one of the most beautiful ‘Canyons’ I have ever seen. I stopped at lunch, quickly, filled up my bottles with water. I looked back the route I had come from but couldn’t see anyone coming down the pass and was positive that I had created a big gap to the following riders and Emma. Off I was again anticipating the first big climb of the day. After about 30 minutes of fun gravel grinding through the valley I found myself in front of the beast. Not really a major climb but after the long journey through Africa any ascent seemed a burden for my legs. A longish 400m ascent later the gravel changed to a tarred road. Perfect to spin and stretch the legs a bit. We descended quite a bit into another beautiful ragged valley with amazing rock formations, passed the popular Khoisan kitchen and Traveller’s Rest ideal for a quick refresher stop and prepare for the next climb of about 200m, followed by the mother of all climbs, the Pakhuis Pass. The pass stretches over a 21km, winding up the mountain visible from far away. I pulled all my strength and energy together and grinded up one stroke after the other. The last stretch consisted of the longest downhill I have ever done in my cycle life, and after 800-meter elevation loss we rolled into Clanwilliam, our rest camp for the night. 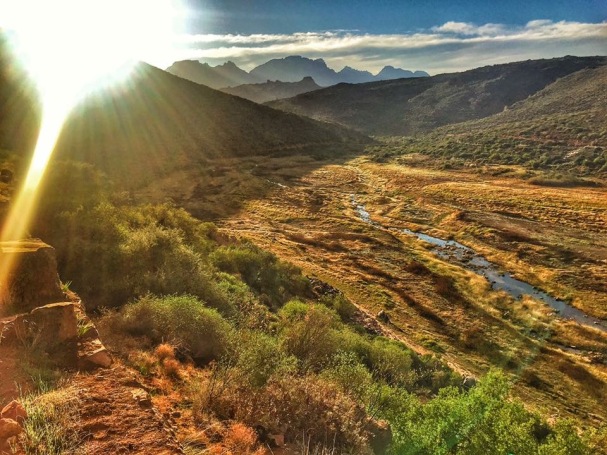 Our last racing day was ahead. With just under 2000m ascent over 134km it was owning up to its name as a Mando day. Out of Clanwilliam we cycled for the first 30 kilometers along the Clanwilliam dam towards Citrusdal. My legs were dead. Absolutely no live in them. I made the best of it and pushed on as much as I could, enjoyed the scenery and thought of the unbelievable adventure behind us. In Citrusdal we turned left and shortly after climbed up the Op die Berg Pass. Everyone who’s done this climb knows that it is pretty long (ca. 1100m elevation gain) I was probably in climbing position for about 1 hour before reaching the top in the middle of the beautiful Cederberg. From there it was all the way along the R303 to the Dorp op die Berg. The last stretch felt very long. By the time we had reached the top of the climb, there was still a good 80km of riding left. I arrived in the camp, tired, relieved and very happy. It didn’t quite sink in but I had won the Tour d’Afrique. I finished, had a 10-hour time advantage and there was no more racing until Cape Town. 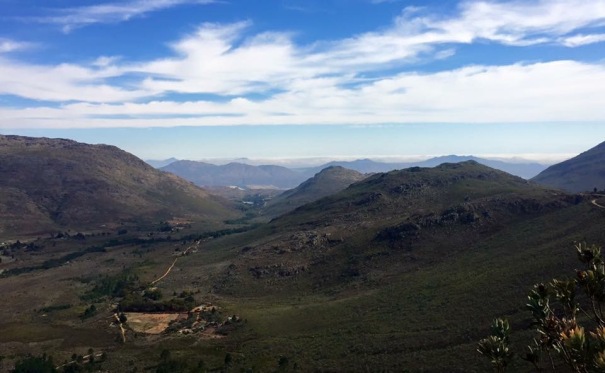 The campsite was located in a wonderful pine tree forest right next to a mountain face. The air was cold and one could sense that winter had arrived. We lid a huge bonfire in the middle of the camp and huddled around with a glass of wine or beer to celebrate our achievement. There was a bit of melancholy in the air so close to the finish. The blissful simplicity of a TDA rider’s live during the tour was certainly not something we easily wanted to trade for our ‘real’ lives. Sleeping, eating, riding for 4 months was all the soul, body and mind craved. Yet, I believe that all of it could only be enjoyed knowing that there was an end to it. 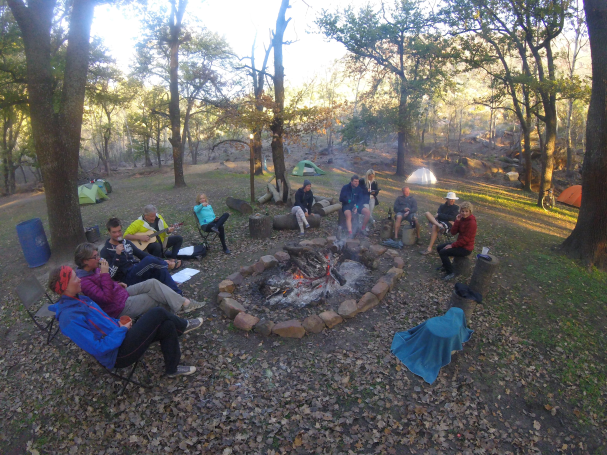 It rained throughout the night, remarkably our fifth time on the tour only. We re-joined the R303 and rolled all the way via Prince Alfred Hamlet, Ceres and later on Riebeek Kasteel to Malmesbury. My lunch break at the 75km mark was long, as if I didn’t want the day to end. We were a relatively big group when we left lunch and cycled towards Riebeek Kasteel on quiet back roads through farm land. All of the sudden a car stopped in front of us, and out jumped a lady. At first I couldn’t believe what I saw but yes, it was Sally-Ann. She road with us from Cairo to Nairobi as she had done the rest of the tour two years earlier. But seeing her in the middle of nowhere was an absolute surprise. Love the spontaneity and lust for living! We arrived in Malmesbury in the caravan park 2 hours later, quickly cleaned up, dried our tents and left for the nearby liquor store to buy the ingredients for the evening’s enjoyment. Our last night together as a TDA family!

Pierre drove up to Malmesbury together with his dad Lectus and joined us for the last ride into Cape Town. We rolled slowly out of Malmesbury via back roads, at some point crossed the N7 and there we were, in Melkbosstrand, the destination of my many rides in Cape Town. There was a lunch stop waiting for us shortly before Big Bay. Some delicious cheeses and snacks later we were on our way to the Lagoon Beach Hotel, the end of the Tour d’Afrique. Some of my friends came to say hello along the way and rode with us in the convoy. It was a very emotional moment with sadness, relieve and joy, all at once, building up in me. The riders’ friends and family were welcoming us. Lots of tears ran and we were all lying in each other’s arms in disbelieve that it was over. We had some pictures taken outside and then moved inside for the ceremony and to hear the last few words from the TDA team. The same evening, we enjoyed a wonderful dinner with friends and family, showed pictures, videos and read out poems that riders had written to reflect on the most amazing adventure of our lifetime. I am very grateful that I had the opportunity to ride my bicycle from Cairo to Cape Town, to meet some of the most wonderful people from all over the planet, and will treasure all the amazing memories. Now for some well-deserved rest until it is time again for the next ride.

Thank you for following my journey.

The seal, the little captain and the red riding hood
Born to be wild for the wilderness of life
Been a while. Thanks Nicole and Troy for getting me back into the washing machine. Loved it 🌀
Reflection time
Space travel with @retroyspective
Old Mac Daddy, Leo and Anton 🪴🏴‍☠️🍪
My Tweets
Follow on WordPress.com